The arrival of the gigantic ‘devils canoe’ at the northern tip of the Tufi fjords, 1874

In long, slender canoes, dangerous looking warriors came paddling out towards the ’Basilisk’. They were many, but they were of course totally bewildered be the enormous monster of a vessel that towered before them. The tall masts; smoke coming out of its gut; the huge wheel moving slowly by the ship’s side pushing it forward; and then the people aboard – white skinned, and with clothes and ornaments that must have come from another world. 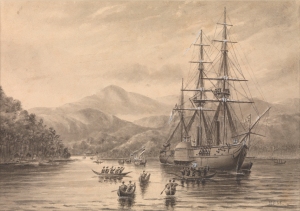 The ship had stopped at the small islands – hardly more than grassy rocks – by the end of the long ridge pointing out towards the open sea. It would stay the night at this anchorage. The men in the canoes, some sitting and some standing on the platforms, were naked except for some shell and feather ornaments. Their hair was tied in long ringlets, like a bundle of firm braids hanging over their shoulders. Their bodies and faces were painted black.

They looked fierce, but this was nothing compared to what the ship looked like to them. The sailors aboard waved with objects for trading – axes, iron hoop and cloths – and a few of the canoes dared to come a bit closer. Then a sudden movement by one of the sailors had them paddle off again – fast, driven by the suspense of this surreal encounter.

The captain and some of his men went ashore to try to make contact in the village they had spotted, but they found the place deserted. All the villagers had taken to the bush, and they had even emptied their houses for many of their belongings. The waitmen looked around in the well-kept houses, with  neat                               State Library of New South Wales fireplaces in the middle, and outside and around they saw pretty gardens.

Back on the ship they were told that a couple of canoes had returned, and this time the men had come along-side the ship. Pieces of cloth had been traded with vegetables and shells. By the point an officer who attempted to map their exact position had a spear thrown at him. They therefore named the place Spear Islets.

The captain’s name was John Moresby, and he was one of the most honorable explorers who have travelled the seas. All certainly weren’t. With this journey he mapped the last unexplored coastline in the entire world – a true feat for the history books. I will return to him and this extraordinary journey in a later posting.

Next morning, from their hiding places in the bush, the villagers saw new smoke come out of Basilisk’s chimney, slowly shoveling the ship into motion. It headed out across the bay aiming for the shores of the Kaiva people further north. After some hours it was lost out of sight and it would take more than fifteen years before the next ship manned by waitmen would pass Spear Islets. 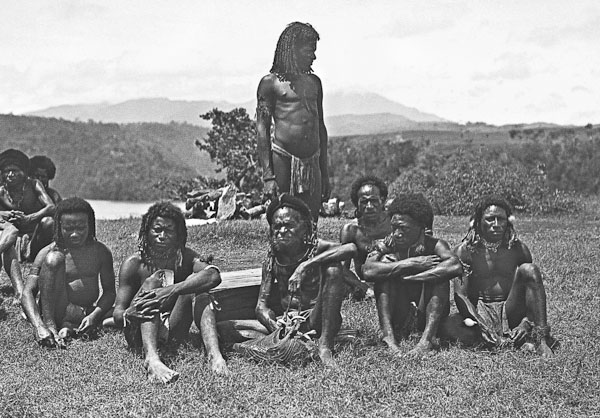 Did this really happen, they asked themselves, while looking towards the horizon. They were holding the red fabric in their hands, but still finding it almost impossible to believe.

Some facts: Natural land alterations have made the islets land-fast since long, so now this place is called Spear Point. The people living around the point today belong to both Arifama, Mokoroa and Miniafia clans, but it’s not clear who the warriors that met the Basilisk were. They could have been Mokoroa, Okeina or even belonging to the now lost Foyogha tribe. The little beach on the point’s eastern side is still a favored place for a break for passing canoes and dinghies.

Do you have another first-contact story form New Guinea or the South Pacific? Please post or link!

Many thanks to the Royal Anthropological Institute, London, and to the State Library of New South Wales, Sydney, for letting me use the historic photos.

is just around the corner!

Tufi is both mountain and sea, both rainforest and beaches – it’s

PNG in a nutshell. I spent six months finding out about what life

is like around the wonderful Tufi shores and collecting stories of

both the past and the present.

Yes, the future too.

So her you can read about 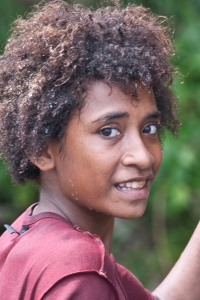 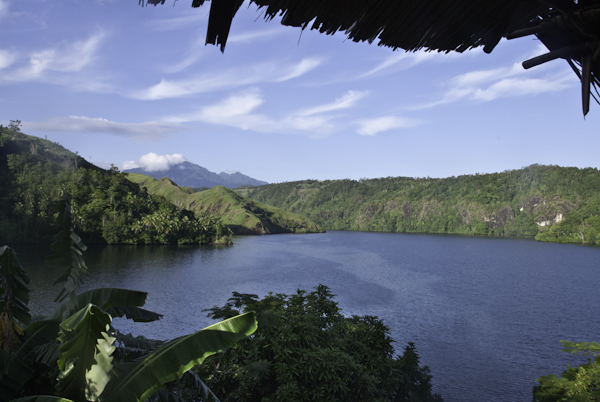 It’s a story about dealing with the past, while looking to the future; about being small in a big world, yet proud.

I’ll keep you updated about the publishing process…..

The waterfall behind Iba Bay is not the biggest in the Tufi area, but it’s the most magical.

I had visited friends at Tumari village and was getting ready to return to Tufi when Emmanuel came and told me about this special waterfall. He knew a place like this would be something I’d like to see, so he sent his son Ambrose along to guide me and my friend William. After an hour in our outriggers we rounded the point by Iba Bay and made a little stop at Kinaru hamlet, one of the many picturesque places along this coastline. Just a couple of houses and shelters under the coconut palms on a small white beach by the turquoise sea – the iconic image of the South Pacific.

Refreshed with pineapples and coconuts we moved on into the fjord, now joined by some young men from the hamlet. It was a sunny and still day, and the sound of the paddles of our little convoy breaking the surface was all we could hear. There are only a few houses and gardens that can be seen going into this bay, and as it narrows down the rainforest and mangroves take over completely. Just where the fjord transforms into a creek we heard a Raggiana Bird of Paradise calling its characteristic “wau-wau-wau” from the bush right inside, but he managed to hide from us.
We parked our canoes and from there it’s only a few minutes’ walk along the creek up to where the small valley narrows down and stops like a dead end. Here we could hear the waterfall, but it was hidden behind a crack in the steep cliffs ahead of us, and to get in there we had to cross the pool of water by the base of the cliffs. This was going to be special! It was almost like swimming into a cavern, with only a round window of blue sky high above us, lined by the forest branches reaching over the top of the steep, black walls of volcanic rock. At the end of the pool there was a meter-wide opening in the side wall, a small cave with a jagged, rocky frame, and in there, we could see water come flushing down as if coming from the inside of the earth.

While we climbed up next to this ‘shower window’ fifteen or twenty flying fox were alarmed by our appearance and took off, making a couple of circles around the opening before disappearing into the forest. We were now standing in this small, dark, chamber-like place with the waterfall coming down from ten meters above us. What a place! Mystical and magical, and strangest of all: the water disappeared into the ground. As if falling into a sink, the water made its way into a circular drain in the lava rock floor, and through this natural pipe flushed further down to the ‘cave window’ below and so ended in the pool before finding its way to the bay. Our companions said they didn’t know any old stories about this spot, but I’m sure there must be some. A place like this must have affected both people and spirits in the olden days, just as it made a monumental impression on us.

There is a waterfall, or several, in every bay around Tufi, and every one of them is worth a visit. They make a natural destination for a rainforest walk, whether a short one as at Barabara, or a long one, as up to the great falls behind Marasa. Their mystic appearances, surrounded as they are by dense forest, won’t leave you untouched and then they all offer a good pool for a wash, if you don’t prefer the shower. Or why not try both?