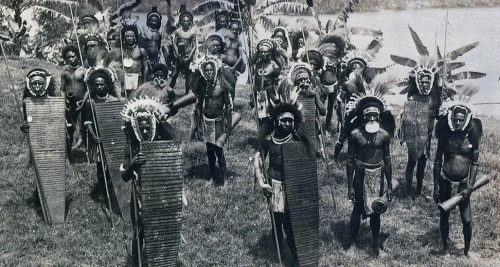 Okeina warriors at a peaceful ‘singsing’ at Tufi, early 1900s.

“One night around 1850 the Korafe clans who were living by Lake Moghana in the hills behind Gobe woke up to the sound of warriors shouting and hollering, and to the death cries of their tribesmen. The Okeina from the coast had come up for revenge; they had sneaked up in the darkest hours and had suddenly charged the sleeping villagers. In the panic and commotion of the attack, warriors from other tribes could be seen as well – the Okeina had brought in re-enforcements to be sure of a successful mission against the strong Korafe. Axes were swung and spears were thrown in the darkness, and soon the whole village was filled with the desperate cries of men, women and children, mixed with the thuds and slashes of weapons and shelters breaking.”

This is how the chapter of the big Korafe migration starts in my Beautiful Tufi book. It think my idea of writing this book started to take shape when I realized that Tufi has a very dramatic history. Here were not only a beautiful place with wonderful people, but here were also stories from World War II, from the devastating cyclone that hit the area in 1972, and then from the pre-colonial days when tribal warfare, cannibalism and migration were part of what people expected to see in their lifetime.

There are several tribes (or groups) around Tufi, speaking different languages, and they are again divided into a great number of clans. Each clan carries the stories of their past, so the big story of the great migration is a conglomerate of stories from all clans. It’s a story of how bigger and stronger groups have expanded into the area, pushing others against each other, and sometimes even killing them off completely. Some were forced to move, sometimes for forever and sometimes for a later return. 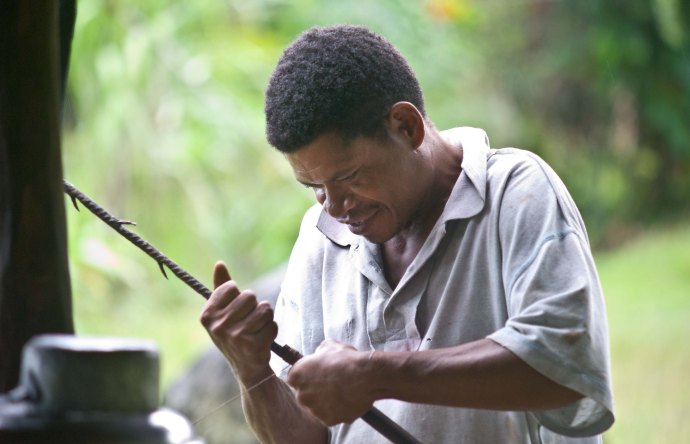 Today the spears are only prepared for hunting.

The Korafe were a big group with many clans that set out across the pass between the Keroroa and Yamewara mountains (Mt Victory and Mt Trafalgar in English) and then lived for some years here and for some years there, finally finding their way to the Tufi fjords where they still are today. Around Tufi the found another people, lower in numbers and weaker, and these they soon dominated, meaning marrying their women and killing their men. It’s part of history now.

“The men who managed to reach for their knives and clubs fought back, but the surprise tactic had its intended effect and many were killed or wounded before the hostile visitors returned down to the coast. Moghana was now a village of devastation, death and despair, and the eerie wailing from those who had lost their dear ones kept sounding through the long hours of the night. This was truly a dark night for the Korafe, in every respect. (…) When the chiefs sat down to discuss the situation they felt the pressure had become unbearable, and once again they decided to gather all the clans and move on.” 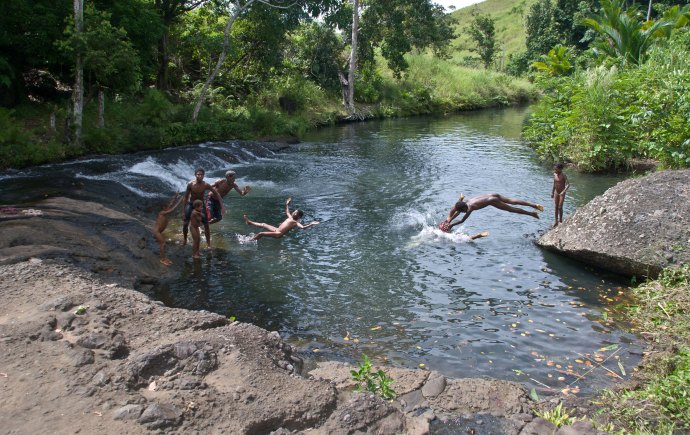 Here, behind Spear Point, the fighting was fierce in the time of the tribal wars. 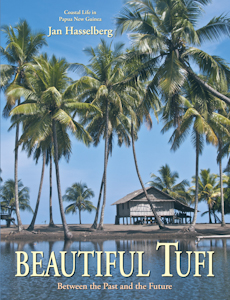